Two ladies separated by a century 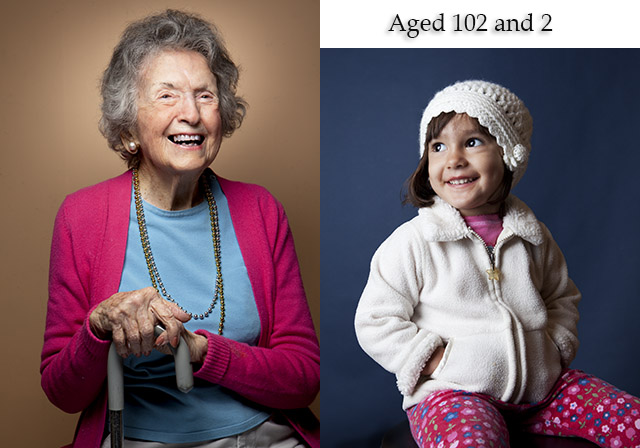 I first met Thelma as she was about to turn 100 years old. I photographed her birthday party at her retirement community.

Originally from Texas, she’d moved to Thousand Oaks to be closer to her daughter. She was an avid reader of serious books and told some great stories. She’d briefly dated LBJ in college and said he was a braggart who boasted he’d go far.

She had the verve and easy laugh of someone much younger.

When she turned 102 I offered to do a formal portrait of her and she graciously agreed. I wanted to capture her bright spirit. The little girl to her right — who I call “Peanut” — was just two when I took this photograph. She’d just gotten the new hat and was happy to sit for me — but not for long. When you photograph children, you have to be ready and flexible.

We had Thelma over for dinner a few times, and she and Peanut got to know each other.

Just before Thelma’s 103 birthday it became clear there would be no 104th. We got together for a final birthday dinner at her place and Peanut came along with the rest of us. She loves singing “Happy Birthday” (even when there’s not a birthday), so she was glad to add her voice.

Thelma loved it. I loved watching the two of them, smiling, separated by a century.

She was sweet and cheerful to the end. Less than a month later, she was gone.